Then & Now: Jewish Businesses, Houses, and Synagogues in South Dallas

This is the third of many installments of “Then & Now,” an intern-driven project of DJHS. South Dallas was completed by Theo Rosen and includes images and information from the Dallas Jewish Historical Society Archive, as well as outside resources. Click the arrows on the left and right to move between slides, and learn more by reading below.

Each of these homes, businesses, and synagogues are also identified on our Virtual Tour of Historic Jewish Dallas, which can be found here: https://virtualtour.djhs.org/

If you know of a historic Jewish-owned business in South Dallas (or elsewhere!) that we should add to the virtual tour, please contact our office or leave a comment below! 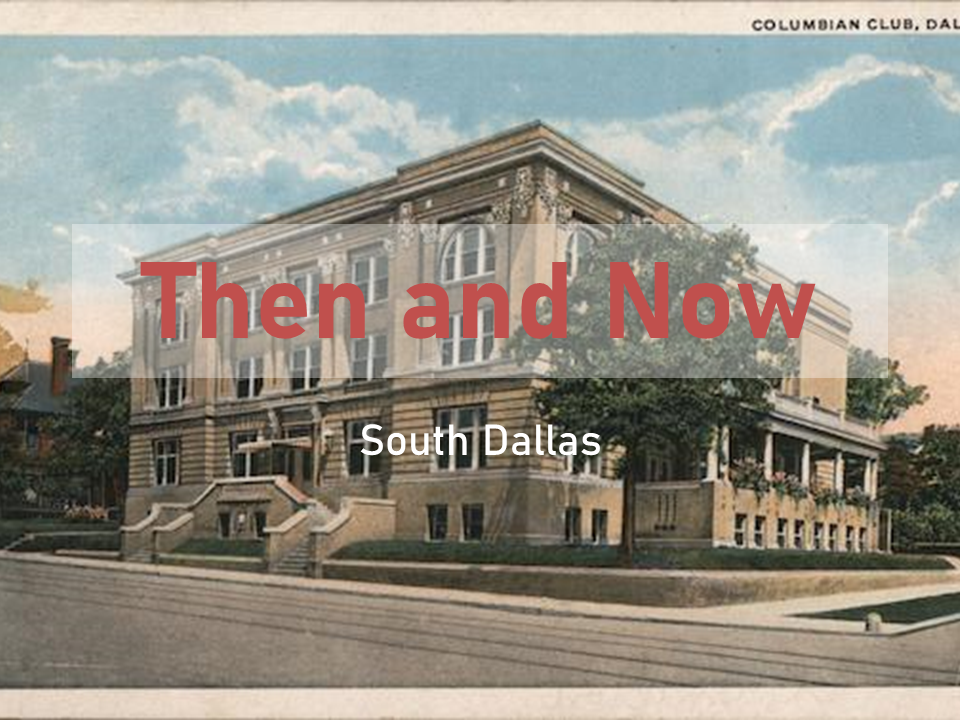 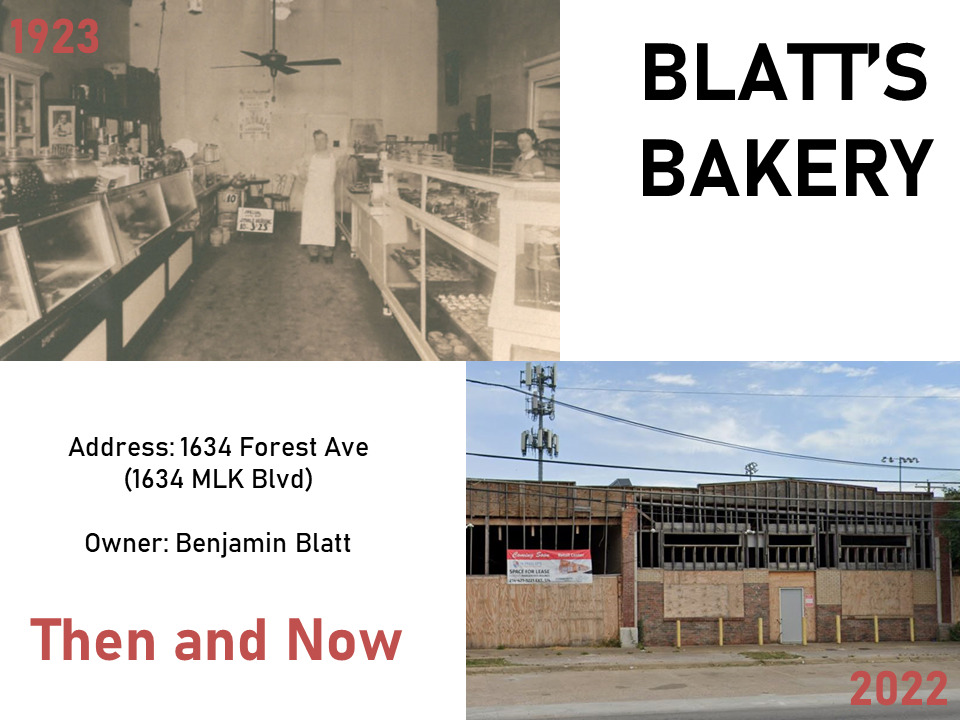 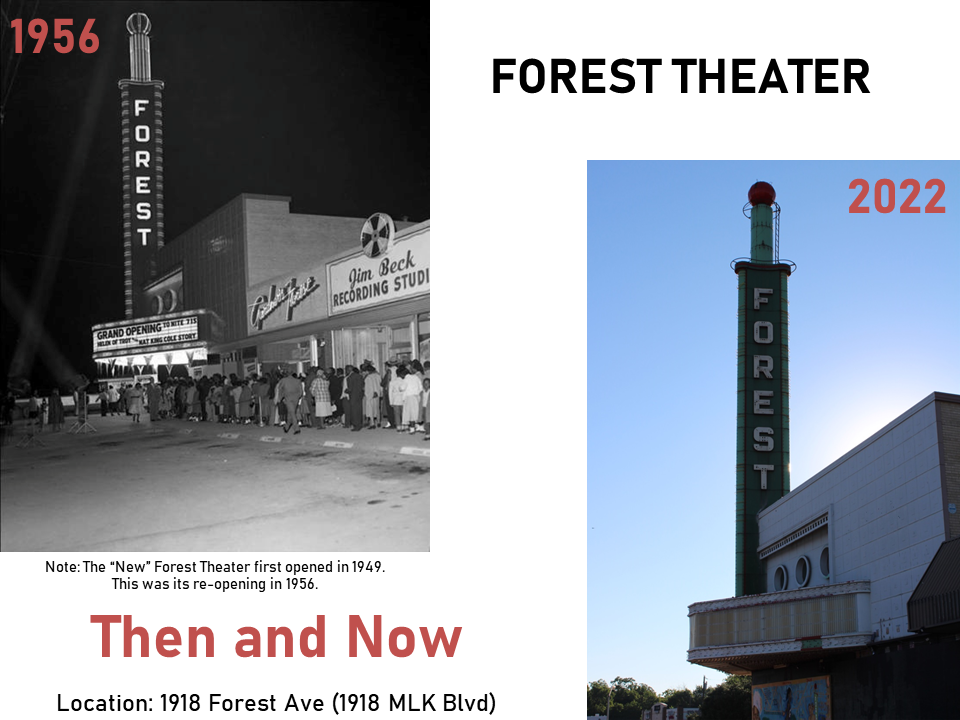 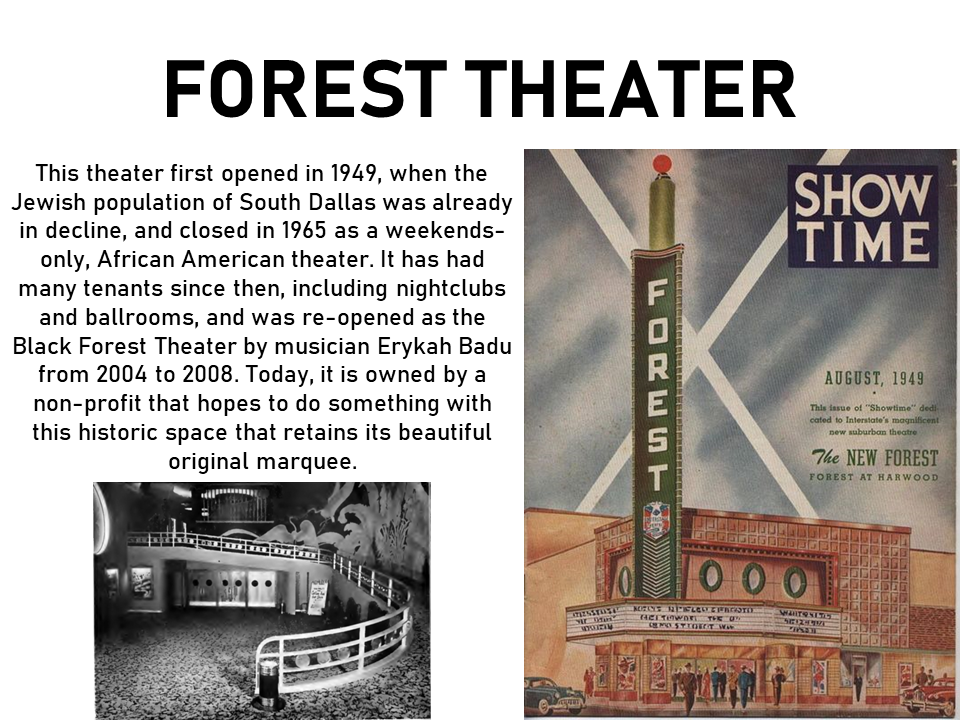 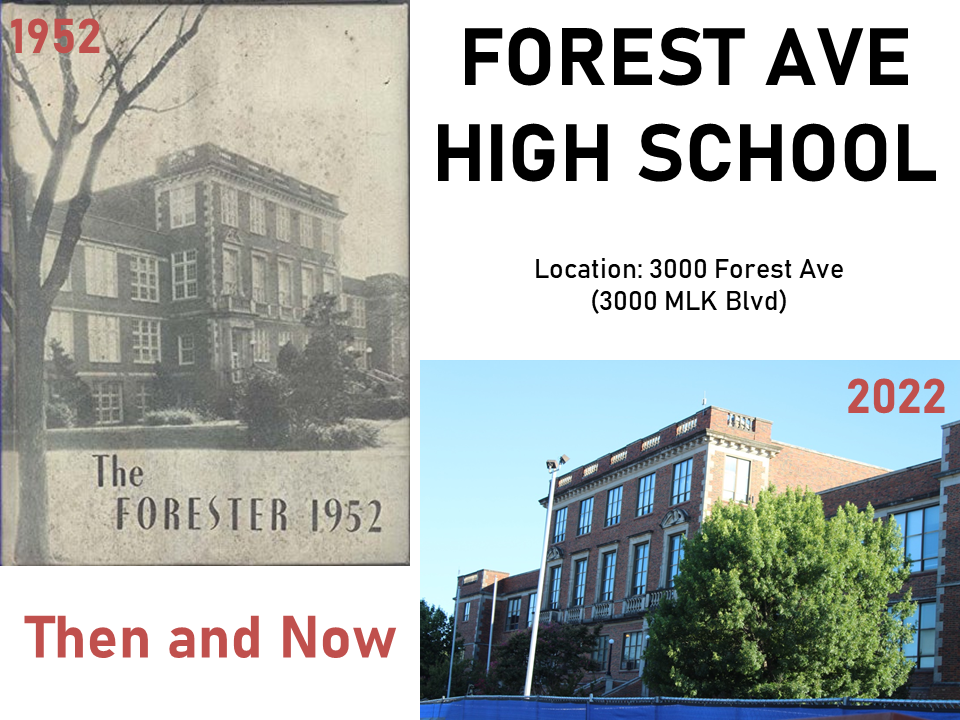 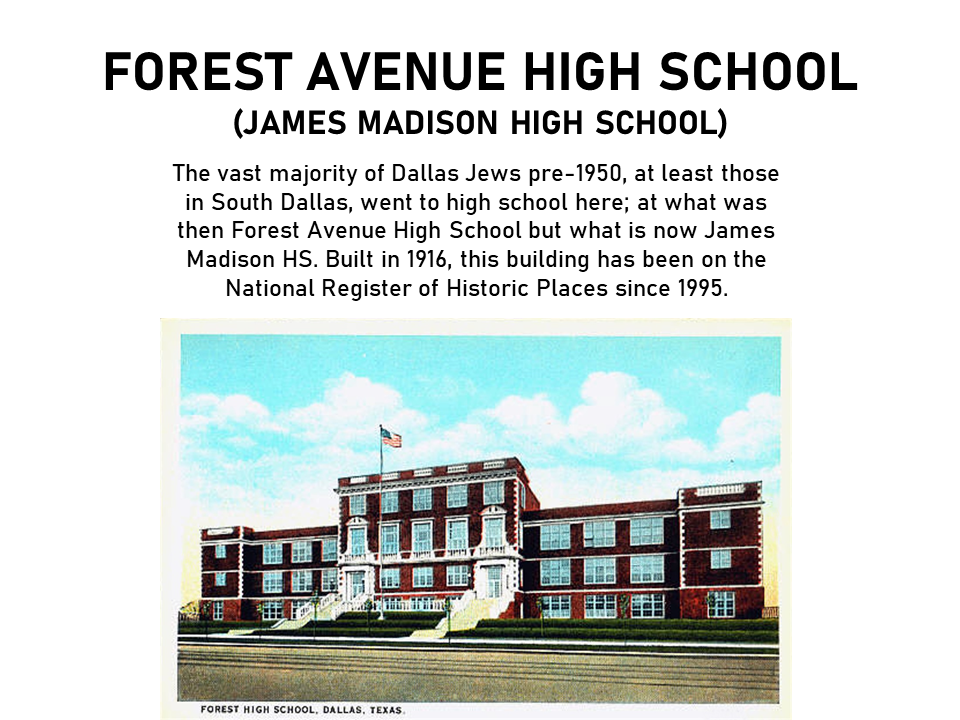 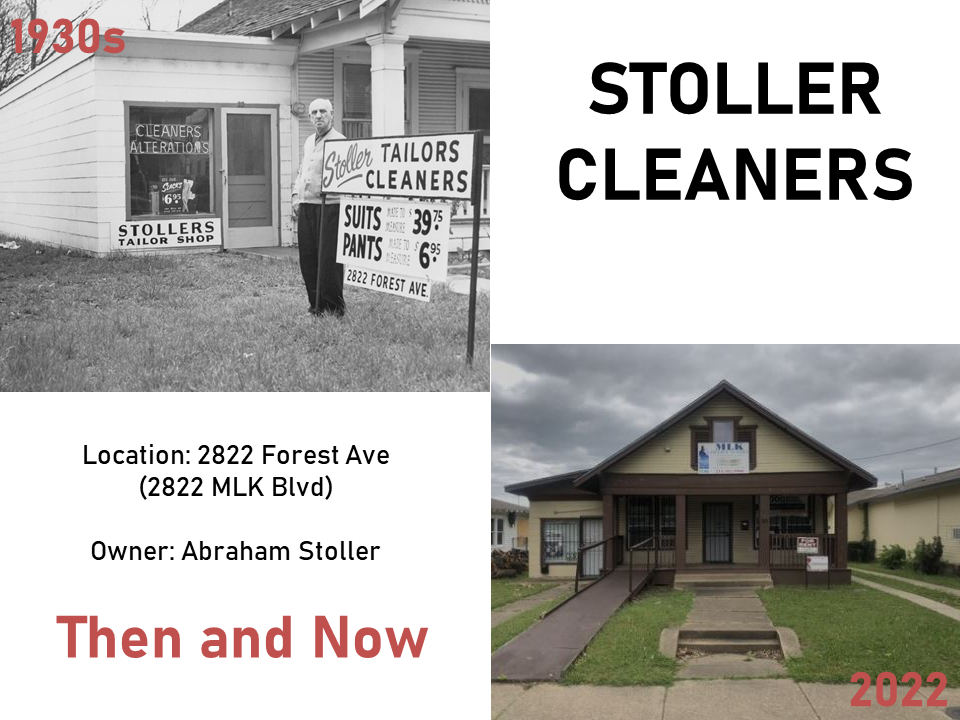 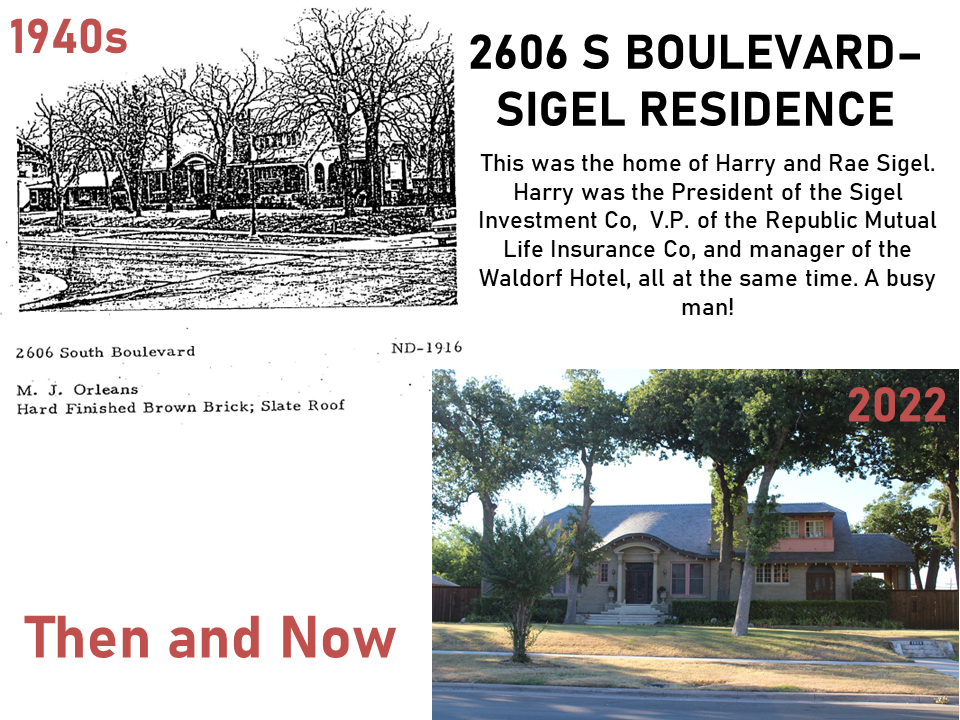 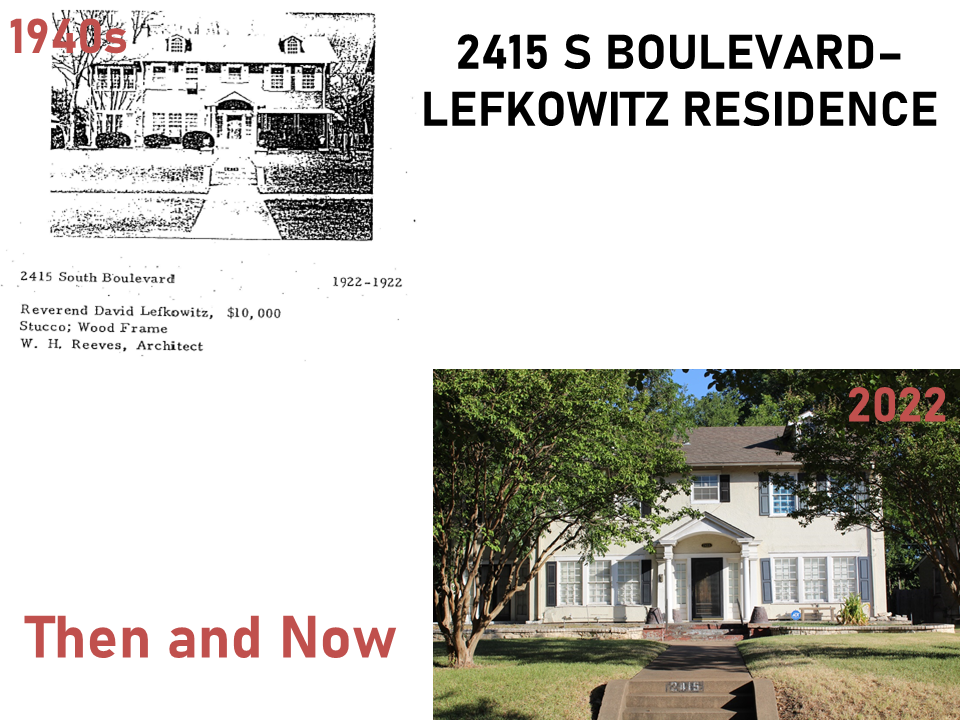 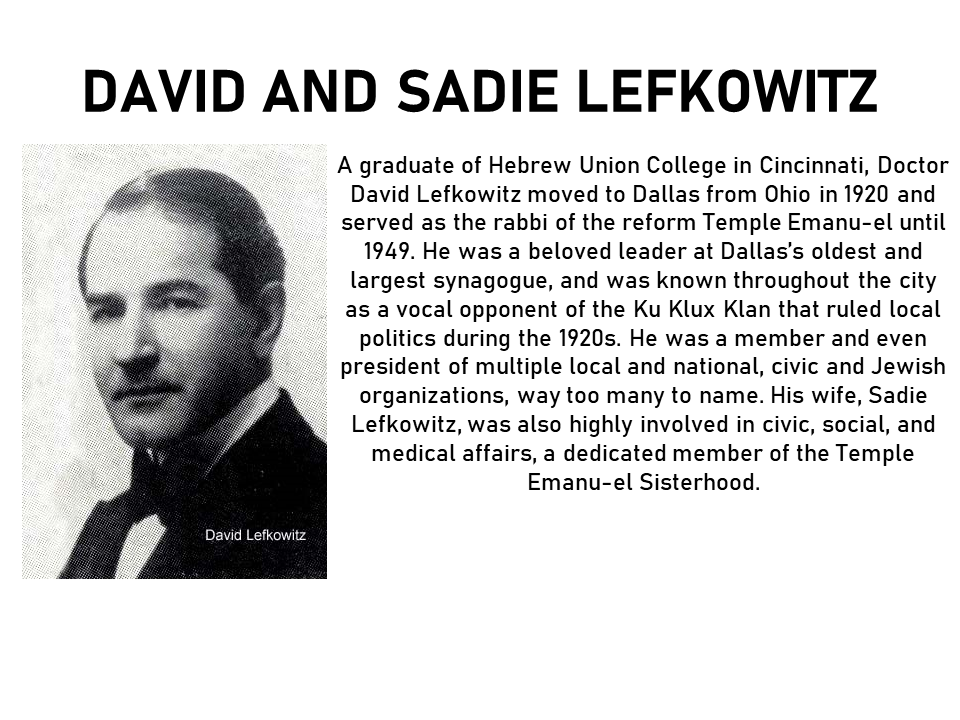 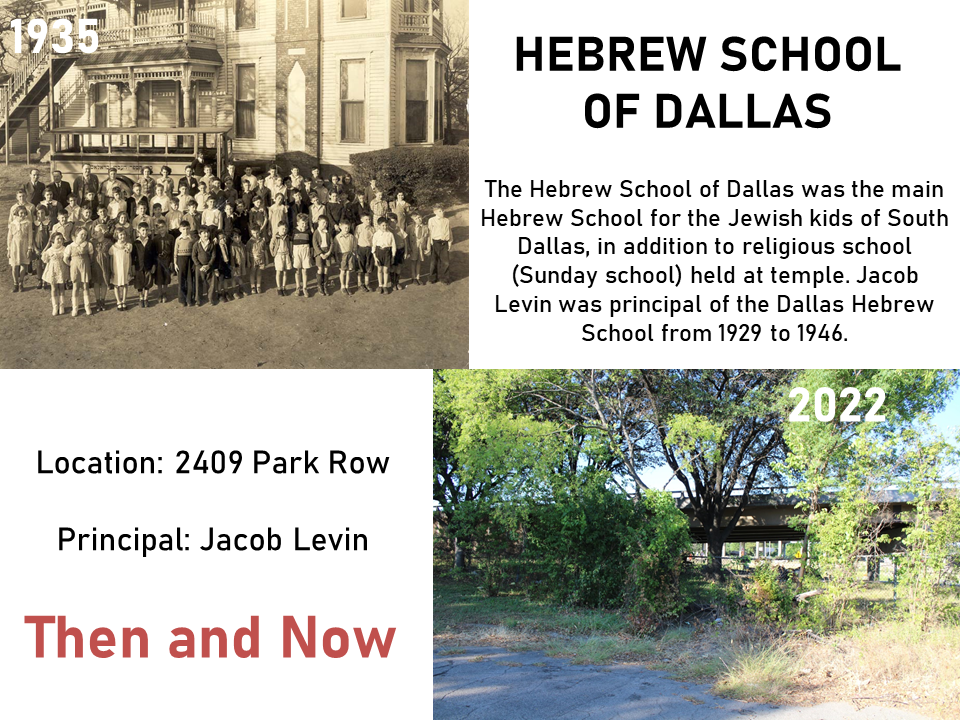 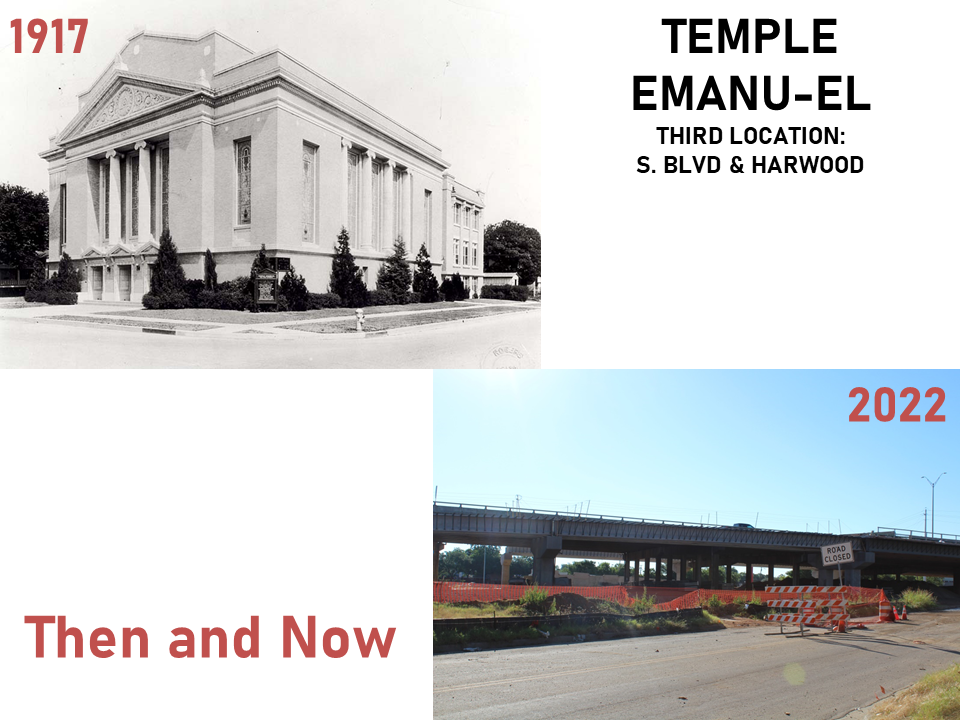 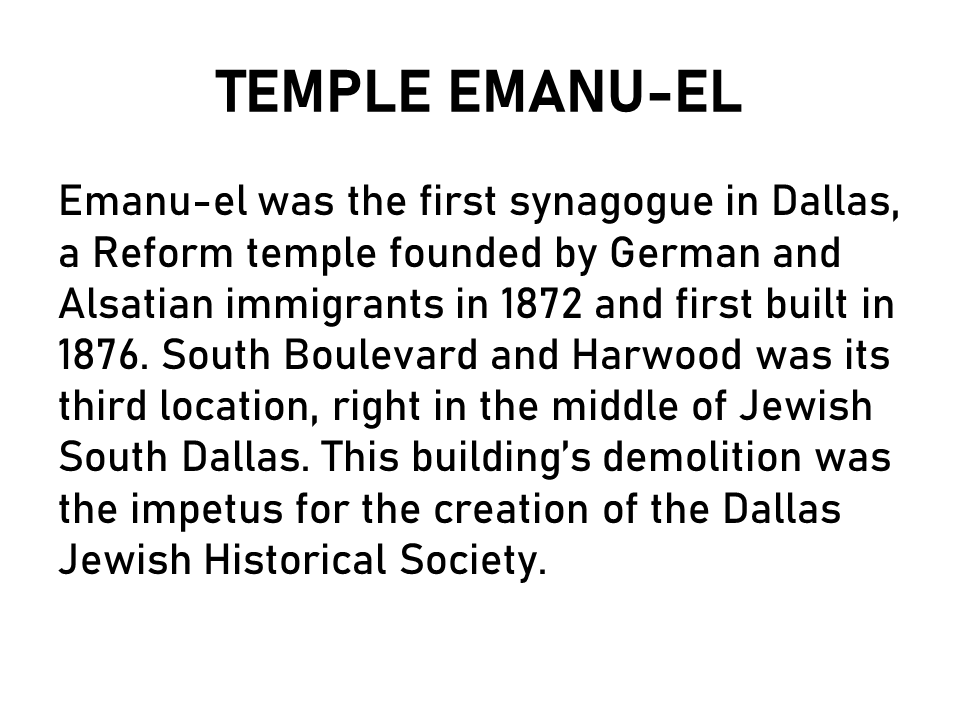 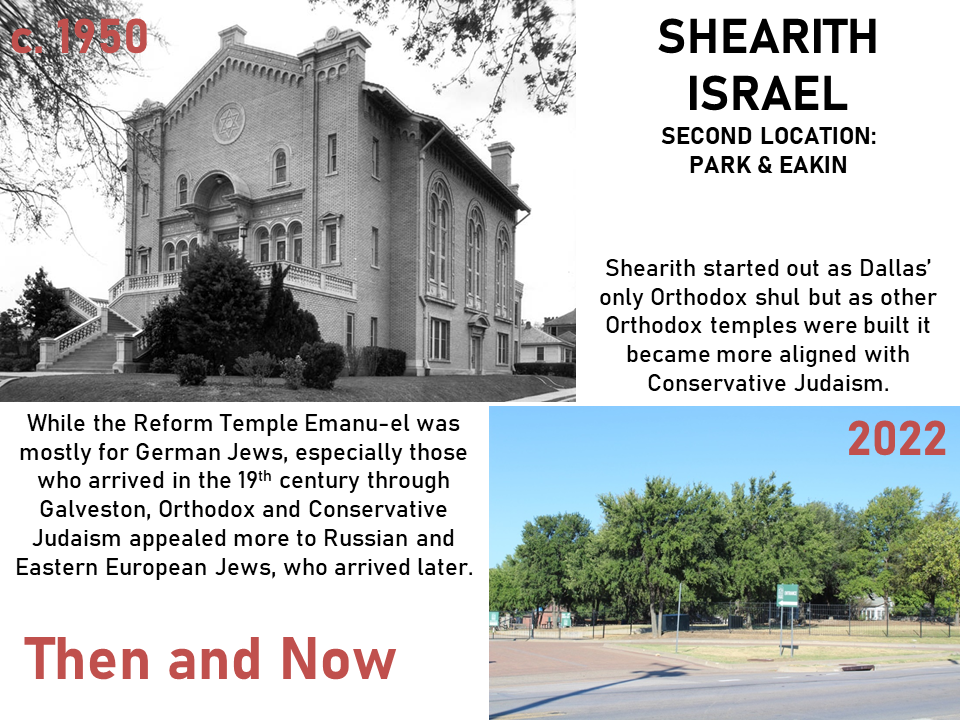 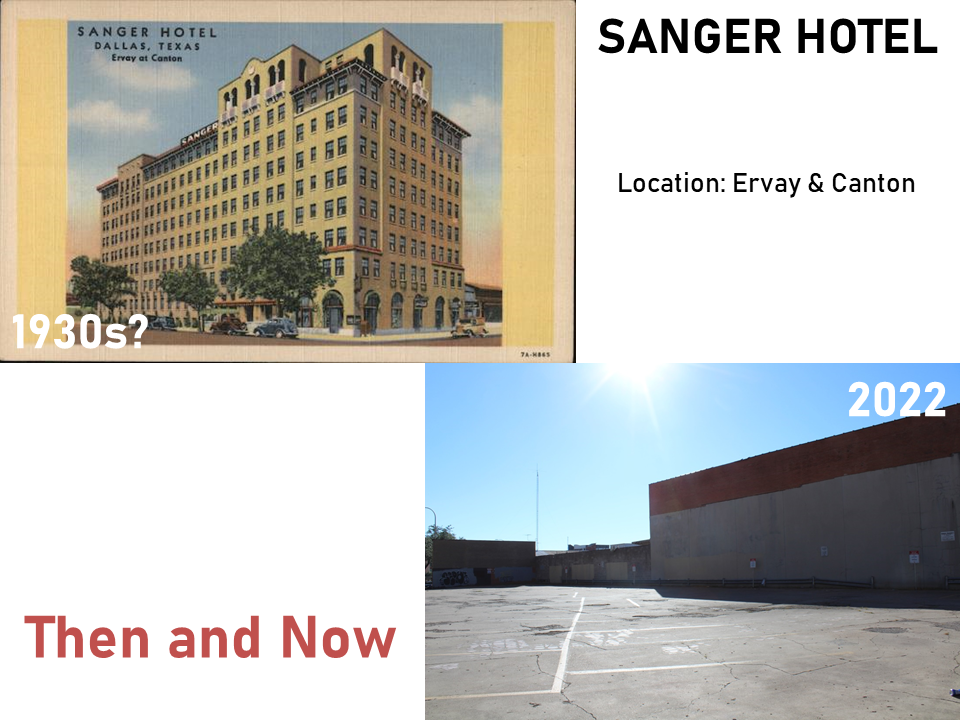 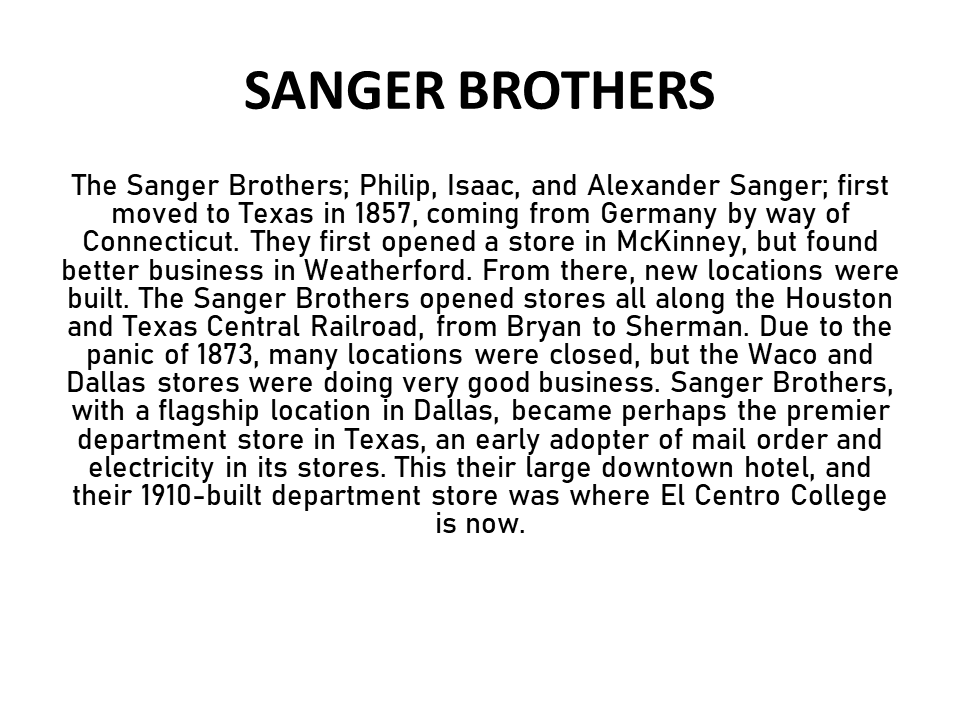 To understand the history of Jews in Dallas, you must understand the history of Dallas. It was founded at a crucial point on the Trinity River by John Neely Bryan. He operated a ferry across the river at a natural crossing point. When he and a few other families founded the town, Southerners on the frontier, they hoped that Dallas would become a port on the Trinity River. Dallas could never grow beyond a footnote on being a stagecoach stop alone. However, the Trinity River never proved to be navigable. Dallas became important in 1872 when residents convinced the Houston & Texas Central Railroad to build just one mile east of Dallas’ courthouse instead of the planned eight miles.

The east-west Texas & Pacific Railroad was convinced by local leaders to go through Dallas in 1873. Now, Dallas became more than just a cotton and buffalo hide town that exported everything to Galveston; Dallas became a true mercantile hub. By the late 1880s, the Sangers only operated stores in Dallas and Waco. But at the same time, Sanger Bros. had made their name as one of the premier department stores in Texas. The company survived in various forms until being merged with Houston-based Foley’s in the 1970s.

As Dallas grew, distinct Jewish communities formed. Many lived just southeast of downtown near City Park (now Dallas Heritage Village). It was in this area, which is mostly gone due to the R. L. Thornton Freeway, that the Young Men’s Hebrew Association (later Jewish Community Center), the Columbian Club (a Jewish country club), and the second location of Shearith Israel (Dallas’s first Orthodox and later Conservative synagogue) once stood. More affluent Jews, especially the department store owners, located their businesses in downtown, on the three main thoroughfares of Elm, Main, and Commerce. Scrappier Jewish business owners, especially pawn shop and wholesale clothing store owners, located their businesses and homes east of downtown on and around Elm Street. It was a strategic area for business due to the convergence of two railroads and a streetcar line. In addition to a large Jewish population, the area was home to the largest concentration of African Americans in the city. It was known as Deep Elm, but due to the African American pronunciation it is better known as Deep Ellum.

Until the 20th century, most Jews in Texas were Germans who emigrated through a port of entry in Galveston. However, increased antisemitism in Eastern Europe and liberalized immigration laws in the U.S. saw millions of mostly Eastern European, mostly impoverished, and mostly Orthodox Jews come through New York in the early 20th century. Many stayed in New York, but some migrated elsewhere. A group of families from northeast Poland, including the Rachofskys and Tobolowskys, made their way to warm Dallas. They couldn’t afford to live near City Park, so they moved into an area of Old North Dallas that was known as Goose Valley. It was bounded on all sides by railroad tracks, and because of this, the land was considered undesirable and the houses were small and cheap. A strictly Orthodox synagogue, Tiferet Israel, was founded, and so was Anshe Sphard, a Sephardic synagogue founded by Jews from the Austro-Hungarian Empire (especially Romania).

Dallas continued growing, and a new area of South Dallas was created. Jews moved away from City Park, Deep Ellum, and Goose Valley to an area of South Dallas centered on Forest Avenue (now known as Martin Luther King Jr. Boulevard). Temple Emanu-El moved to a location on South Boulevard, a street that was almost entirely Jewish. Congregation Agudas Achim was founded for Orthodox Jews in South Dallas that could not walk to Shearith or Tiferet. Pretty much every Jew in South Dallas attended John Henry Brown Elementary or Colonial Hill School, both of which have since been replaced, and Forest Avenue High School, which still stands as James Madison High School. For Jewish education, most congregations had Sunday school, and the Dallas Hebrew School existed at the house of Principal Jacob Levin for decades.

By the 1920s, South Dallas was really the only Jewish neighborhood in town. Anshe Sphard had closed and Tiferet moved south. Along the main avenues of Forest and Colonial could be found such Jewish-owned businesses as Blatt’s Bakery, Dallas Bakery, Friedman’s Bakery, Golman Bakery, New York Bakery & Deli, and the Julius Schepps Bakery complex a little further south. (Sensing a trend?) For entertainment, the Forest Theater and White’s Theater showed movies to Jews and gentiles alike.

There are too many noteworthy Jews of South Dallas to name, but I would like to mention two that have had a profound impact on the city of Dallas. Rabbi David Lefkowitz was rabbi of Temple Emanu-El 1920-1949. Along with Dallas Morning News president G. B. Dealey, Lefkowitz was an important critic of the Ku Klux Klan, which dominated local politics in the 1920s. The other is Julius Schepps. The son of Russian immigrant bakers, he was kicked out of Texas A&M when it was discovered he lacked a high school diploma. He worked tirelessly to succeed as a businessman. He sold his bakery in 1928 and went into the insurance business. He was beloved in civic life, donating to many humanitarian causes both locally and in the world. The J.C.C. became the Julius Schepps Community Center after him and the Julius Schepps Freeway was named in his honor.

In the 1940s, the wealthiest Jews had moved out to the Park Cities or Lakewood. In the 1950s, African Americans started moving to South Dallas, triggering white flight to other neighborhoods. Once freeways were built South Dallas was no longer Jewish at all. It exists today as an African American neighborhood, but the population is much smaller than in the 1930s and is cut in half by the freeway. The Greater Dallas Jewish community is thriving and growing substantially, but South Dallas sadly is not.