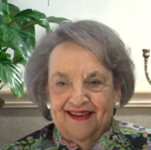 Marilyn Golman was born in 1932 in Dallas, Texas. After a brief time living in Cincinnati, Marilyn’s family moved back to Dallas. Marilyn went all through the Highland Park school system and graduated in 1949 from Highland Park High School. She had the interesting opportunity to do her practice teaching at the same school that she had attended as a child, Bradfield Elementary School. Growing up, Marilyn and her husband, Bob’s, families knew one other, and they married in 1961. Following that, Marilyn was hired in 1954 to work as a teacher at a private school called The Lamplighter School, the first Montessori school in Dallas. As a mother of two, a grandmother, teacher, and role model, Marilyn has influenced many.