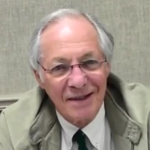 Dr. Alan Menter and his wife, Pam, were one of the earliest Jewish families from South Africa to arrive in Dallas, thanks to a fellowship opportunity at UT Southwestern Medical Center in 1973.  Since their arrival, the Menter family has been actively involved in Jewish communal life, including Temple Shalom and AJC. Dr. Menter, born in England in 1941 and a former member of the South African National Rugby team, is a renowned dermatologist and authority on psoriasis as a serious immune-mediated disease.