Treasures from the DJHS Archives – February 2016

Among the many collections to explore, the archives of the Dallas Jewish Historical Society, located in the Aaron Family JCC, houses a collection from one of Dallas’s premier department stores of the 20th century.

Titche’s, or Titche–Goettinger’s as it was known, was opened in downtown Dallas in 1902, by Edward Titche and Max Goettinger. Originally located at the corner of Elm and Murphy Streets in downtown Dallas, the store moved in 1904 to the Wilson building and then again when it built its flagship location at St. Paul Street, between Elm and Main Streets, which was then considered “Uptown”. At this new, much larger location the store successfully competed for Dallas’s growing fashion-conscious consumer and expanded the number of stores.  Over the years, Titche-Goettinger was sold to larger retail conglomerates, who later shortened the name to Titche’s when the store expanded into the suburbs in the 1960’s and 1970’s. The name was changed again from Titche’s to Joske’s (its sister department store chain) until the then-owners (Allied) sold the stores to Dillard’s in 1987.  The flagship location in downtown Dallas was closed after the Dillard’s acquisition.

This collection, generously given to the DJHS by Ellis M. Titche, a founding family descendent, includes a Titche-Goettinger General Ledger Cash Book from 1908-1910, a 1904-1905 Fall/Winter catalog, store gift boxes, an employee nametag from the 1960s, a wedding registry book published in 1964, and numerous photographs early store locations, as well as panoramic photographs from company picnics taken during the 1920’s. Additionally, the collection includes a promotional brochure and a newspaper article announcing Titche’s as one of Northpark Mall’s first anchor stores.

Come visit us when you are at the Aaron Family JCC, or check out our extensive collection of oral histories from Dallas Jewish personalities at www.djhs.org. The Dallas Jewish Historical Society works to collect, preserve, and protect the papers, photographs, artifacts and recorded personal stories that illustrate the history of the Jewish community in Dallas. The DJHS depends on annual membership dues, starting at $72, to support our programs and archive efforts, and is a partner agency of the Jewish Federation of Greater Dallas. Come join us!

By Stuart Rosenfield, DJHS Board Member 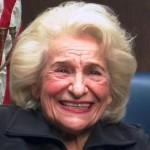 Sarah Yarrin was born and raised in Tyler, TX, with her three sisters: Fanny, Marilyn and Ruthie. Sarah’s father came from Poland to Galveston without his parents, and her mother came to Tyler, Texas, at the age of 16. Sarah married Marvin Yarrin z”l and moved to Dallas, Texas, where they raised three daughters. She has passionately stated that one should look forward but never forget the past, which she demonstrates through her involvement and work with the Dallas Holocaust Museum and as a Life Member of the Dallas Jewish Historical Society Board of Directors. Additionally, as a very musical woman, Sarah has long been an active member of the Temple Emanu-El choir.

We have two interviews in our collection for Sarah.

Click here to watch the interview conducted by Karen Prager on February 4, 2001.

Click here to watch the interview conducted by Scott Farber on October 13, 2014.