Alexander Sanger, one of the five Sanger brothers of Dallas, was in the business of dry goods and retail. He was a successful business owner, but also helped organize and start the Texas State Fair; serving as the director from its start in 1886.

This coin was given to Alexander Sanger by The Texas State Fair & Dallas Exposition Association in 1894, which was its ninth year running, in appreciation of his time and efforts spent as president. The coin features Sanger’s portrait in profile in the middle of the coin. 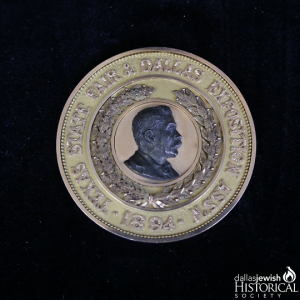 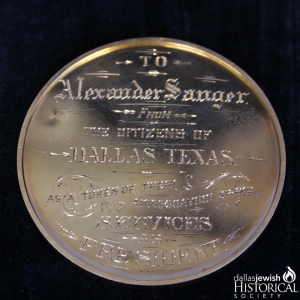 This wedding cake topper was bought from Neiman Marcus, and we believe it’s from the 1930s.

This particular topper is made from plaster; the bride wears a tulle veil, with an arch of cut cloth flowers. Demand grew for similar matrimonial figurines in the 1920s. These early wedding cake figures could be made out of such things as wax, celluloid, plaster, paper, porcelain, etc. 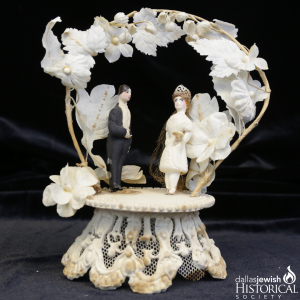 This dime collector was given out by Hadassah, of the Women’s Zionist Organization of America, Inc.

“The new organization’s first act was to collect money and send two nurses to Palestine in 1913 to provide pasteurized milk to infants and new mothers, and to eradicate trachoma, an easily cured eye disease, that was robbing thousands of sight,”

This dime collector was in support of curing the eye disease, as it states: “Now is the moment, now is the time, $5.00 saves an eye, each day give a dime.” The dime collector was sent to Hadassah supporter, “Mrs. Herbert Friedman” or Sarah Bornfeld Friedman. Mrs. Friedman passed away in 2009, and her obituary states, “Sarah was a Life Member of Hadassah and an active member of Congregations Shearith Israel and Tiferet Israel and other Jewish organizations.” 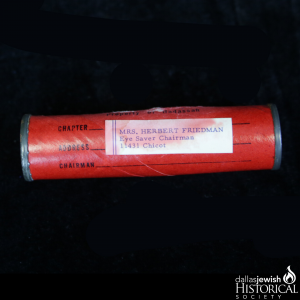 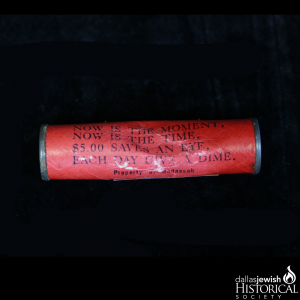