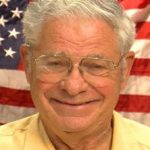 Jo Reingold was born in Dallas, Texas, and has been a highly active member of the Dallas Jewish  community, with many leadership roles in various organizations. From a very young age, she has valued community service.