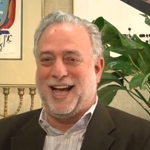 Reid Heller was born in 1956 in Norfolk, Virginia, and his family moved to Dallas in 1974. His parents met in Virginia while his father was in the U.S. Navy, stationed in Norfolk. Reid entered college after his junior year in high school and later went to Southern Methodist University Law School. He and his wife, Karen, married in 1982. A lover of teaching and influencing others, Reid has edited and conducted hundreds of Jewish seminars within the Dallas Jewish community. He has taught history classes at various congregations in Dallas, teaching a Medieval Jewish Studies class at Tiferet Israel, for example. Reid has a deep passion and interest in history and genealogy and is a former President of the Dallas Jewish Historical Society.
To watch the video, click here.