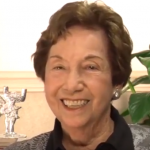 Helen Stern, a native Dallasite, was born in 1926 during the Depression. Helen’s father came to the U.S. around 1911 through Galveston at age 16 and was the only one in his family at the time to leave Diersburg, Germany. He didn’t speak any English at the time, and was taken in by a family in South Dallas. Her mother, also from Germany, was one of nine children. Helen went to the University of Texas at Austin during the war and described it as being a girls’ school during the week due to the nature of the war. Helen and her late husband, Arthur, had three children. She remembers learning to drive on Northwest Highway and telling the milkman and baker when to make deliveries to their home. Helen volunteered her time with the Sisterhood in Temple Emanu-El, working as treasurer and working on the yearbook as her first job with them.