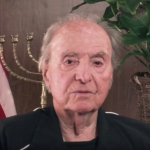 Are you a good listener?

It is with deep sadness that we extend condolences to the family of Ginger Chesnick Jacobs on the death of their mother, grandmother and great-grandmother, on Thursday, June 16, 2016.

Founder of the Dallas Jewish Historical Society, Ginger tirelessly from 1971 up to the last several months to ensure that the rich history and the many contributions of the Jewish community in Dallas will be remembered.

Services will be held at Congregation Shearith Israel, 9401 Douglas Ave., at 11:00 a.m. on Friday, June 17, 2016, in the Aaron Family Main Sanctuary; internment to follow at  Shearith Israel Cemetery, 4634 Dolphin Road in Dallas.

Memorial contributions may be made to the Ginger Chesnick Jacobs Historical Tour and Outreach Fund at the Dallas Jewish Historical Society.

May Ginger’s memory be for a blessing on all who knew her, may her soul be bound up in the bonds of eternal life and may her family be comforted among the other mourners of Zion and Jerusalem.

Mix together.  Place in heaps on rice paper and bake at 350 degrees for 15 minutes.

If no rice paper is available, you can use non-stick foil or parchment paper, or even a pan that has been sprayed.  The advantage of the rice paper is that it is edible. You can dip the bottoms in a thin layer of melted chocolate.