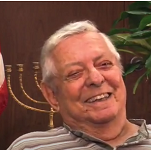 Al Garment, the oldest of two boys, was born in 1928 in Brooklyn, New York. As a child, Al attended Brooklyn Tech High School, where he studied engineering. In June 1946, Al entered the military. He has been married for 65 years and together he and his wife have two daughters. Al began working in his father’s fabrics business but then switched over to electronics and mechanics. He came to Texas in 1960 and built fighter planes for many years in Grand Prairie for LTV and then worked for Boeing for around 12 years. Al and his wife have been involved for many years with Congregation Tiferet Israel, Jewish War Veterans, and the Texas Jewish Post.