Dr. Dave Tobolowsky was born in 1922 in Dallas, Texas. Dave is a hard-working man and a retired pediatrician. He, his wife, and his children have had a strong influence on Dallas’s Jewish community. 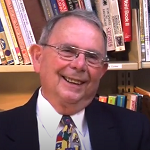