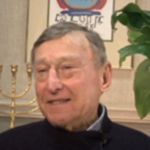 Irwin Grossman was born in 1931 in Paris, Texas, and moved to Dallas in 1937. His father came from Russia and his mother from Lithuania, but they met in Dallas. Irwin’s father started a dry goods store and later became a real estate investor. Irwin had his bar mitzvah at  Congregation Shearith Israel and later was confirmed at Temple Emanu-El. He attended MIT and later entered the general contracting business. Irwin was very involved in Golden Acres, building several buildings there, and eventually becoming president of Golden Acres as well. He also built some of the buildings at Temple Emanu-El and was vice president of Temple Emanu-El and of the Jewish Federation. Irwin, along with his wife, Irma, has been a very important member of the Dallas community.