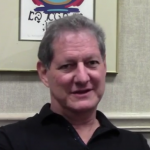 Stanley Fine grew up in Johannesburg, South Africa, where he attended primary school, high school, and university to study law. Stanley married his wife, Lynn, in 1982, and together they moved to Los Angeles for seven years before settling in Dallas on July 4th, 1992. Stanley discusses the differences between South Africa and America, specifically with regard to business and social conditions. Stanley has been involved with the U.S. Holocaust Museum and assisted in one of its programs, an education seminar given to Texas teachers from public and private high schools and universities. Stanley and Lynn have two children and continue to express their gratitude to the giving Dallas Jewish community.