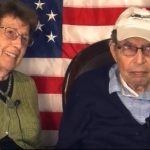 Born  in 1924, New Jersey.
Wally was born in Hobo ken and Ruth was born in Union City. They met at a Hebrew school at the age of 10. Wally was in the Air force and flew for 37 missions during the war He got married after the war in 1947 and attended the New York University. Ruth is a physical therapist by profession and she graduated from Syracuse University in 1944. She has been very active in Judaism and was also the president of American Jewish Committee.
Published on Sep 20, 2018
To watch the video, click here