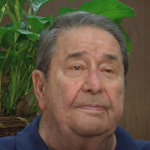 Bob Goldberg was born in 1927 in Dallas, Texas. He attended grammar school in South Dallas, followed by Forest Avenue High School. Then, he went to University of Texas for a semester and a half before enlisting in the military at the age of 17. He was stationed in San Francisco as a radio operator, sending out messages into the Pacific Ocean. After his service, Bob came back to Dallas and married his wife, Lois, a few months later, in 1946. Bob studied business marketing at SMU and ultimately ended up working for a large metal recycling company for 32 years. Together Lois and Bob have one daughter and two sons, all of whom have been very active in the Dallas Jewish community. Their sons opened up a scrapyard under their father’s training. Bob has been an important member of the Dallas Jewish community, serving his time on the board of the Jewish Community Center and with other organizations.