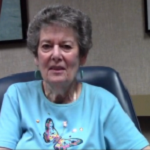 Joyce was born in the city of Bayonne, New Jersey and moved to Dallas with her parents and brother when she was 2.5 years old. went to Ben Milam Elementary school and Spence Junior High. She graduated from Hillcrest in 1955. She attended Oklahoma University where she met her husband. She is very actively involved with the Jewish community and volunteers at JCC.

Born in Rhodesia which is now better known as Zimbabwe.
His parents met in Rhodesia and got married in Southern Rhodesia
He grew up in the town of Salisbury and went to the University of Cape town in South Africa from where he graduated as an architect. He started practicing in Salisbury and became famous in the entire country. He had offices in South Africa, London, Paris and Holland
He started a family in Salisbury and was the head of the Hebrew congregation as president for many years. He was also the chairman of various societies and president of the institute of architects.
He came to Dallas, Texas in 1986 to start a new life and got himself involved in real estate development.
Published on Apr 19, 2016

Myrna Ries
Grew up in Brooklyn and moved to Dallas, Texas in 1941. She went to Brown School and attended Temple Emanu-el sunday school

Gail Bruker
Born in Johannesburg, South Africa, Gail grew up in a Jewish neighborhood and attended a Jewish school. She came to US on a trip in December 1985, with her fiance and decided to settle in Dallas. She got married and started teaching in a Jewish school. She is actively involved in Jewish communities and believes in her allegiance towards Israel.
Published on November 12, 2013.

Ann Loeb Sikora, a Professional Volunteer: Why We Celebrate Her Legacy

Ann Loeb Sikora was a native Texan with roots in Ballinger and Sweetwater. After attending University of Texas – Austin, Ann returned to Sweetwater to work in her family’s business, Levy’s Department Store. Eventually, Ann made her way to Dallas where she worked in Neiman Marcus and became involved in community causes.

Endearingly dubbed a “professional volunteer,” she volunteered and/or served on the Board of Directors for a plethora of organizations including: United Way of Metropolitan Dallas; Community Council of Greater Dallas; Greater Dallas Community Relations Commission; American Jewish Committee; Council of Jewish Federations; National Council of Jewish Women; Congregation Shearith Israel; and, Golden Acres –Home for the Jewish Aged.

Ann passed in 2001, leaving an emptiness in all areas in which she served and big shoes to fill for her successors. Ann Loeb Sikora was loved and respected by many. Her legacy is rooted in her devotion to countless causes in the Jewish and general communities. And, her time and attention continue to resonate today.

Beginning in 2002, the Dallas Jewish Historical Society initiated the Ann Loeb Sikora Humanitarian Award, which recognizes those individuals who have demonstrated outstanding commitment to public service and who stand as role models for future generations.

This year we honor four women—Melissa Ackerman, Brenda Bliss, Susan Bendalin, and Karen Weinreb—who embody Ann’s legacy and the true spirit of philanthropy. Check back on our blog to learn more about these extraordinary women as we prepare to celebrate their contributions to our community.

Click here to become a sponsor or purchase individual tickets to Sip & Savor: Celebrating Sisters in Philanthropy on Thursday, May 2, 2019 at Temple Emanu-el. Cocktails and heavy hors d’oeuvres will be served.